Posted on 4th Nov 2013 by webknaphill

Fireworks at Knaphill by Lesley Godbolt!

It was definitely chilli last night, as well as windy and I was glad of the 5 layers I had decided to wear. My hat also got it’s first outing and although not the most flattering of ‘beanies’ it did the trick and kept my ears warm!

We arrived at the Vyne field about 6.45pm, paid our £3.50 entrance fee and immediately headed for the burger and hot dog queue.  I was expecting mediocre burgers and hot dogs for over the top prices but was pleasantly surprised to see that the burgers and hotdogs were supplied by local butcher, Prince and Sons of Horsell.

The cheese burgers were served with real cheese i.e. not that plastic cheese square stuff and the hot dogs were real sausages, both for £3 each, pretty reasonable. 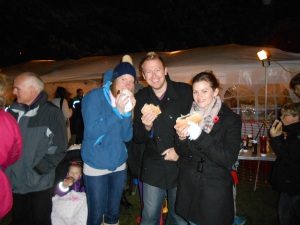 Once we’d scoffed the hotdogs and hamburgers we headed for the ‘drinks’ queue. After queuing behind a bunch of people who weren’t in the queue for 5 mins!  we finally got to the front and ordered some lovely hot chocolates and one cup cake between us. This proved to be a big mistake as the cup cake was delicious ( apparently home-made by Kerry, who was on the stand) and we wished we’d got a couple more. Only our waistlines thanked us for abstaining from the cup cakes. 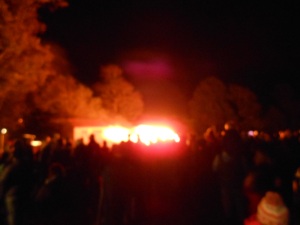 The fire which had about 10 Guys on it was lit at 7pm and quickly caught fire and whipped up into huge warming flames with some exploding  Fire Crackers to add to the excitement. The wind was really blowing at this point and I was a little worried for the nearby trees as the flames seemed to have been blown upwards and towards the trees, but it was all under control and got the evening off to a blazing start.

Little groups of teenagers huddled together with their hamburgers and hotdogs trying to look cool, while families stood around watching their kids playing with sparklers, making shapes and writing their names in the sparkler’s light. Kids were hoisted onto shoulders to get a better look at the bonfire and quite a few little Jedi knights were merrily sword fighting with their new neon lightsabers. Mums were running round after their little Lukes and Darths making sure they didn’t stab their swords in the wrong person or stick their toffee apples to Auntie’s new leather coat. Meanwhile, the dads discussed the technicalities of the fire and reminisced about how they’d once done their own fireworks display.  The crowds were variously lit up with neon Mohicans, bracelets and necklaces and it all added to the special atmosphere of fireworks night.

We amused ourselves trying to stand behind the tallest person to get out of the wind, hands stuffed in pockets and heads down we jostled like penguins for the best position. We moaned about a lack of tights under jeans, hopped from one foot to the other, engaged in random jumping and clapping of hands and generally behaved like the British when they are trying to keep warm.

Finally the display kicked off. The Fireworks were fabulous, with lots of oohing and ahhhing from the crowd, loads of big bangs and explosions and showers of light. They seemed to keep going for ages we kept thinking it was going to end only for more and more fireworks to flash across the night sky. Finally it came to a noisy finale with a well earned round of applause from the crowd. My neck was killing me from constantly looking upwards into the s 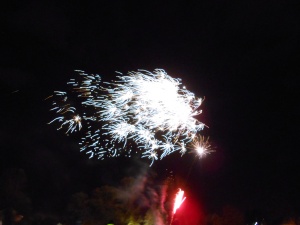 ky but it was definitely worth it. The 1st Knaphill scouts put on an amazing display and a thoroughly enjoyable evening out. 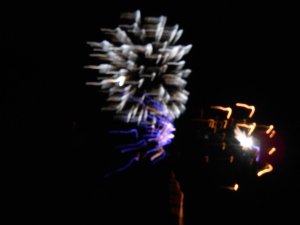 We went home to our mulled wine and chocolates with a warm fuzzy feeling having seen a great British tradition at it’s best!!