Posted on 8th Mar 2013 by webknaphill

Pandemonium has descended on Knaphill High Street as the first full day of construction begins at the old Cliftons site.

As noted by Phil Stubbs,

Five large trucks arrived in the village with the objective of removing earth from the Clifton’s site. Given the size of the site only one truck could actually enter the grounds and the other four trucks were parked in the High Street. One truck was parked half on the pavement and half on the road outside 22 High Street (Take Away), the second truck was parked on the zigzag lines at the pedestrial crossing outside Barclays and the third and fourth truck were taking up the whole of the bus lay-by outside Anchor Crescent.

Despite being reported to the police on their 101 number, only the truck on the zig zags was of concern to them and the others were a civil matter. Strictly this is true but it’s pretty obvious that they’re all part and parcel of the same issue so in my opinion this is a very blinkered view to take. That said, a car was to be despatched as one became available.

This is the first full day of construction and the Council plus the police have to firmly lay down the ground rules. Will they?

I have just taken a call from Surrey Police, they have visited High Street and after talking to the site manager the police have agreed that one truck can wait in the bus lay-by but that there should be no other trucks on the High Street. The reason for allowing one truck is that the police were informed that it will only takes 10 to 15 minutes to load a truck and they want to complete the task as soon as possible. The contractor has been told that if they do not stick to the instructions given to them this morning they will be booked. 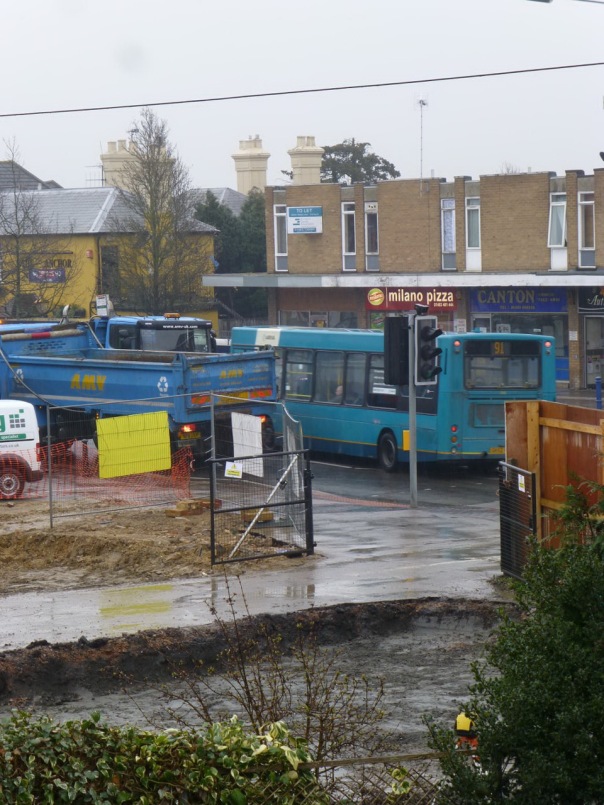 Well we didn’t have to wait long! Furious residents have complained to WBC and councillors about the contracting company’s blatant disregard for residents and the practicalities and legalities of getting large vehicles to the site. This has been exacerbated by doing so in rush hour traffic.

There’s a picture (awaiting permissions) as a good example – of a lorry reversing into the site on the pedestrian crossing, with a bus trying to pass, and an HGV waiting in the opposite lay-by. As has been pointed out – is this the future of all deliveries given the arrangements approved by the planning committee?

← No improvement for traffic until after 2020?
Should Knaphill develop a Neighbourhood Plan? →