Posted on 5th Nov 2010 by webknaphill

The history of Knaphill owes a great deal to the people who live here; to long established residents and some more recent arrivals.  KRA’s Memory Lane articles are based on the stories of real people who have made their home in Knaphill. When we were preparing the article ‘The Men and the Boys’, some of the wives overheard our conversations and they asked us to remember that wartime is not just about the exploits of the men! So we went back to record some of their wartime experiences; recollections of rationing, joining the Women’s Forces or doing ‘war work’, because the upheavals of 1939 – 45 were important for women too.

Josie Plant was born in Knaphill in 1937. “My dad, Joseph Plant, was a soldier, posted to Inkerman Barracks with The Royal Warwickshire Regiment. He met and fell in love with my Mum, Joan (Frost). Once War was declared he went off to fight, and was reported “missing” in 1940; I think we all thought we’d never see him again.  It was not until 1943 that Mum was notified he was being held as a prisoner of war by the Germans. On the day my Dad came home, my cousin Neil and I saw a chap coming down Anchor Hill, I didn’t know who he was; I didn’t know it was my Dad. Mum and the family put on a big party for him and made banners saying – ‘Welcome Home Joe’. He didn’t talk about it a lot, but we knew he’d had a terrible time at ‘Stalag XX1D’ prison camp.

I was only a kid, but I remember the ‘Doodle Bugs’ – bombs that would cut out and stop; some landed in Knaphill, the houses would shake. We often slept in the cupboard under the stairs (for ‘protection’ from the bombs) and later we had an ‘Anderson Shelter’ in the front room. It was like a big metal cage that you crawled under. In the first year after the war it was still there; we threw a cloth over it and used it like a table for my birthday party.” 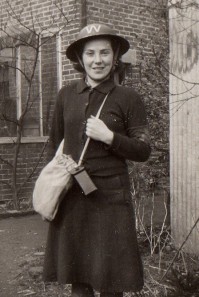 Grace Ludlow (nee Small) was born in 1918 and from the age of 5-12, by coincidence, lived in the very same house Josie was born in years later. Grace’s father was a well know local nurseryman, renowned for his roses. “I used to cycle down to our Village Hall for dances. I met my Joe when he was serving in the ‘Royal Welsh Fusiliers’ stationed at Blackdown Barracks. My Dad was none too pleased that I was being ‘courted’ by a soldier but I knew he was the one for me. We got married in 1939 and Joe was one of the first to leave for war. He had a gift for languages so he was seconded to ‘Intelligence’ and he didn’t get much home leave all through the war.

He was injured before Dunkirk and brought home on a ‘hospital ship’. Once he recovered he was sent to the Far East, down the Burma Road and he was briefly a Japanese prisoner of war, but managed to escape. Talking about it now you can hardly believe what the soldiers went through.

While Joe was away I moved back to live with my parents in West End,  and I worked at the bakery in St Johns, and in the evenings I was out in my tin hat as an ARP (Air Raid Precautions) Volunteer. I had to make sure everyone’s windows were ‘Blacked out’; so the bombers wouldn’t see us.

The siren at Brookwood Hospital often warned of attacks. Once a fighter plan crashed on the Recreation Ground at West End Village and my middle brother Alf found a machine gun in the wreckage. He brought it home, and sat with it propped it up on the kitchen table until Dad shouted – Get that back where you got it from!”

Patricia Norman was twenty-two when war started and was living in Bath, Somerset then. Pat worked as a civilian at the Admiralty. She had to sign the Official Secrets’ Act.  But despite the coded messages, teleprinter and a secret ‘phone, Pat said it was often boring.

Bath’s historic buildings were bombed as part of Hitler’s “Spite Raids”, and a bomb dropped very close to Pat’s (less historic) home. She also remembered the long years of rationing. When a food parcel from Australia Pat and her mother were overjoyed to have dried egg powder, jelly crystals and tinned fruit; it was years before she could eat a fresh egg without feeling guilty!

Di Blair grew up in Mitcham. Aged fourteen, in 1938, she started full time work as a clerk at Conservative Central Office in Westminster. At that time Britain was not ready for war, so when Chamberlain (the Conservative Prime Minister) came back from Munich with ‘peace’ secured it was a great relief to the British public. Thousands sent him letters of gratitude and Di’s office had the job of acknowledging every one of them.War came, and for a while Di continued to work at Central Office. On one occasion Di actually spoke to Winston Churchill! She had to take an urgent message by hand and as Di approached he said “Is that for me my dear?”…..to which she calmly replied “Yes sir.”

Di saw a poster – ‘Join the WRNS’. She join-up in June 1942, aged just 18. Initially as a ‘Wren’ within the Fleet Air Arm, but later as an ‘Air Mechanic – Ordnance’ (AM-O). She was taught how to strip down and repair all manner of small arms and ground defence weapons– rifles, Bren guns, Machine Guns. Most of the time she was based near Portsmouth; so it will be no surprise that she met and later married a sailor; she married Danny Blair, who features in one of our ‘The Men & the Boys’ articles. 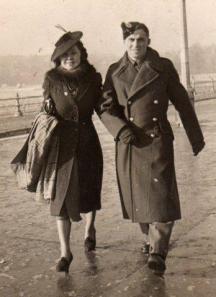 Life was not easy for the girls who were at home. Soon after war started Joan Clark went to work in an aircraft factory, making parts for ‘Spitfires’. The bombs, time spent in the air raid shelters, the hardships, they were all part of everyday life and shortages meant Joan, like everyone else, had to adapt and cope. When Joan got married in 1941, she chose blue cloth for her wedding dress; it had to be ‘practical’, not just for one day!

Like other forces wives the early years of her married life were mostly spent apart from her husband. John was posted to Africa in 1943, when Joan was heavily pregnant. She was able to write and send photos, but it was nearly three years before he got home to see her again and to see their son for the first time. But as Joan said…..”at least I was one of the fortunate ones, my husband returned safely”.
……………………………………………………………………………………………………………………………………..
Thank you to everyone who has shared their memories with us for these articles.